Cardano (ADA), the fifth largest cryptocurrency by total market capitalization, is on the eve of major updates, and this is getting many investors excited. Although the last drop in ADA price is due to the general market situation, it is likely to lose its effect with the upcoming updates.

Tim Harrison, the senior manager of IOHK behind Cardano ,revealed a development that will please ADA investors in the post he shared. Harrison emphasized that the Alonzo Blue hard fork was successfully completed and this is a very important milestone.

Cardano started working for Alonzo, who may change the fate of the network after the Mary hard fork, and it is known that this is going step by step. Testnet hard forks such as Alonzo Blue or Alonzo Purple must be performed before switching to the Alonzo hard fork. The first development in this regard has been made recently and Alonzo Blue has been officially active. 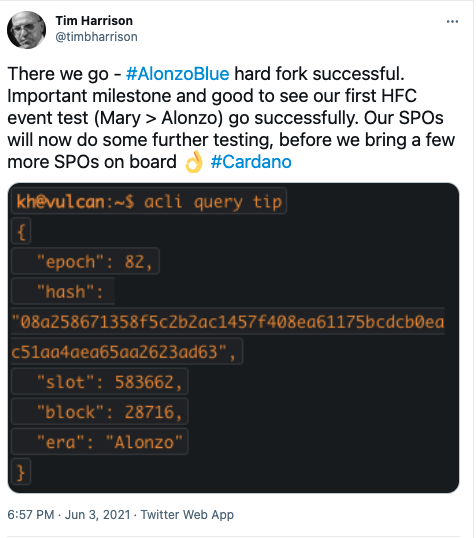 Harrison stated that the first hard fork attempt was successful and proceeded smoothly. Emphasizing that the developers in the network will carry out additional tests in the continuation of this, the famous manager underlined that if there is no problem in the continuation, they will bring several new SPOs to the network.

The completion of Alonzo Blue is the first successful step in the transition from the Mary hard fork to the Alonzo hard fork. In the statement made by the Cardano team, it was emphasized that this hard fork would take place in the summer period. In the same period, Cardano’s rival networks also have important updates.

Critical Period for Cardano and Ethereum

The biggest competitor of Cardano is undoubtedly known as Ethereum. Charles Hoskinson, the founder of Cardano, was once among the co-founders of Ethereum. Hoskinson, who was fired from the team as a result of disagreements, later implemented ADA to surpass Ethereum.

With the Alonzo hard fork, it is known that the network will have a smart contract function. These functions will enable the use of decentralized applications linked to smart contracts in the network, and the network will gradually work like Ethereum. Of course, the EIP-1559 update and London hard fork that Ethereum will implement in the same period may overshadow ADA’s price rise. In the same period, Binance Coin can also be expected to rise due to the NFT platform.